A pearl of a company 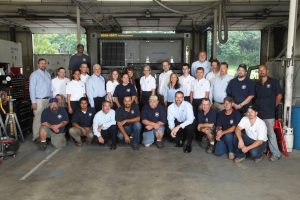 Klinge Corp, as it is known now, began its modern history in 1984 when it was purchased from York Borg Warner. “However, the roots of the company go back a little further to the mid-1940s when my late grandfather, Paul Klinge, started a trading business in Denmark,” says Vice President Allan Klinge. “Eventually, the company grew to have a focus in refrigeration and became agents for York Borg Warner’s marine transport division in 1972.” Development and production of special transport refrigeration units began in 1974, specifically for the export of Danish bacon and butter to the United Kingdom. In 1984, Klinge bought the division and renamed it Klinge Corporation. The company maintained its equipment design and production in Denmark and after a number of years moved its department for specialty applications to the US. One part of the specialty applications was a focus on glycol-based heating and cooling systems, primarily for the tank container market. Most of the work in Denmark was standardised production and this was eventually sold to Sabroe (now owned by Johnson Controls) and, later, to Thermo King in the early 1990s. In 2011, Klinge Corp acquired Kjellerup, Denmark-based Norfrig Equipment, a supplier of ultra low temperature refrigeration and thawing solutions. Over the course of Klinge Corporation’s 30 years in the refrigeration and power generation business it has seen tank container manufacturers and operators strive to reduce space, weight and costs. “Customers are certainly concerned with how much product they can move and how little space it is going to take up. So, two very important aspects for us would be minimising the size of the equipment and minimising the weight of the equipment in
particular,” explains Klinge. “Our development goals are a little different than some of our competitors as we are focused on making a more lightweight and efficient option that provides the amount of capacity needed to maintain chosen temperatures, whilst minimising the amount of sacrificed product space.”
October 9, 2014
You currently do not have access to this article, please login or register to read more. Login to read moreor
« A tank of best, please
Getting the big picture »