Big fish in a small pond 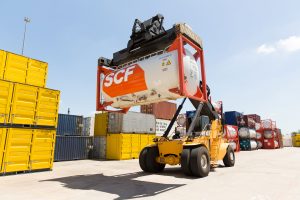 Australia’s SCF Group may not be a global player but it is renowned as an innovator in container design, writes Dale Crisp
SCF is recognised as one of Australia’s largest container providers, specialising in new and used container hire, sales and design. It is a leading supplier to the national transport, resources, construction, defence and chemical storage industries. Over the past 26 years, SCF has placed the South Australian capital Adelaide on the world map by developing container innovations for Australia’s top companies. Established in 1989 by Richard Sykes and Lindsay Carthew, the company quickly grew, developing containers which became known for their innovation, strength and durability. Sykes knew the transport game ‘inside out’. After years in the furniture removal industry, he saw an opportunity in the transport and logistics sector. In March 2007, Archer Capital’s Growth Fund took a controlling stake in SCF when it partnered with Carthew and Sykes to enable the company to pursue expansion opportunities. The focus was on investing in the lease fleet and growing into adjacent product segments, such as accommodation rooms and tank containers. In May 2012, most of Archer’s 60% stake was bought by London-listed Intermediate Capital Group (ICG), with the remainder bought by Sykes, Carthew and SCF management to regain majority ownership. ICG is a specialist investor and asset
manager, providing mezzanine finance, leveraged credit and minority equity, managing over $17bn of assets. It has historically provided mezzanine debt to buyout sponsors but also makes minority equity investments
alongside management teams.
To read the rest of this article you will need to subscribe to the magazine. October 11, 2016
You currently do not have access to this article, please login or register to read more. Login to read moreor
« A pearl of a depot
Tailoring assets and services to needs »