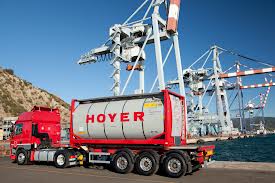 Transport and logistics services provider HOYER announces slight turnover growth in the fiscal year 2016 just ended. The turnover of EUR 1,189m was 0.3 per cent above the previous year’s turnover (EUR 1,185m). Thus the Hamburg family-owned company continues its sustained positive business trend in the 70th year of its existence. The earnings before tax amounted to EUR 40.4m, representing the second-highest pre-tax result in the company’s history (previous year: EUR 43.2m). Return on sales was 3.4 per cent (previous year: 3.7 per cent). The equity ratio of 42.2 per cent was somewhat higher than in 2015 (41.8 per cent). The number of staff employed by HOYER rose above 6,000 for the first time. This means a total of 6,079 employees worked for the company in the anniversary year 2016. The HOYER Group’s investment volume remains high, amounting to EUR 102.2m in the 2016 fiscal year (previous year: EUR 112.7m). In this respect, current low transport equipment procurement costs were utilised to rejuvenate and modernise the tank container fleet. HOYER Group shareholder and Chairman of the Advisory Board Thomas Hoyer said: “The size of our annual investments is astonishingly high compared to other family businesses in the logistics market, as well as in manufacturing or consumer goods industries. People often talk to me about this, but it is a particular feature of bulk transport and its special requirements. These major investments will prove to be good decisions in the medium and long term.” In the context of
digitisation, HOYER has started
equipping containers with smart
technology and is investing in high performance, secure IT systems that guarantee connectivity to the various customer’s systems. The Hamburg logistics specialist has a worldwide presence, and in addition to transport services for the chemical industry, it also offers gas logistics services, foodstuffs transport and fuel deliveries to service stations, airports and industrial plants. The HOYER Group is increasingly involved in the area of Supply Chain Solutions (SCS). This business line generated considerable turnover growth of 18 per cent in 2016 compared to the previous year. Accordingly, the overarching Chemilog business unit again contributed the largest proportion (31 per cent) of HOYER’s overall turnover. The volume of transport was maintained at the previous year’s level both in this business unit and in the Deep Sea business unit (overseas activities), although with slight turnover decreases due to the sustained margin and price erosion in the market. The Gaslog business unit held its ground in this challenging environment, and confirmed the previous year’s good figures. The
Petrolog business unit recorded turnover growth of 9 per cent, comprising mainly supplies to service stations. The HOYER Group has combined its asset management processes in the newly-created Netlog business unit
since 2016. In the bottom line, HOYER closes the fiscal year with above-plan earnings despite difficult economic framework conditions and market uncertainties in view of political developments in Europe and the USA. In the service station supply and SCS area, for example, the trend in the order situation is good. Long-term forecasts for chemicals production are also positive and consequently the company sees itself as well positioned for the future, and plans to expand further its market position as one of the leading worldwide suppliers of logistics solutions for the transport of liquids in the coming years. June 23, 2017
You currently do not have access to this article, please login or register to read more. Login to read moreor
« Light weight composite tank containers for Peacock
82 Bertschi tank containers hit the Silk Road »