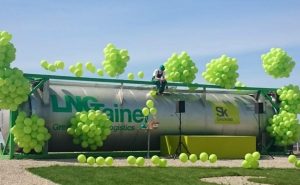 A Finnish startup has built 'the world's largest' LNG tank — and it could contain an energy revolution
Finnish Startup LNGtainer announced last month it has inked a deal with a Norwegian company for an international project, for which they intend to buy 200 of the Finnish ﬁrm’s LNG containers.
With a list price of €140,000 per container, this makes the deal worth close to €30 million.
Liqueﬁed natural gas’ (LNG) is natural gas that has been converted into liquid form. It’s cooled to -162ºC, making it nonﬂammable and also shrinking it (by volume) some 600 times.
This makes it much easier to transport LNG around the world than, for example, building a pipeline. It’s much safer than other methods, and it produces 25% less CO2 than traditional fossil fuels. As a major source of energy, LNG has been around since the 60’s
Considering that "LNG demand is set to grow at twice the rate of gas demand, at 4 to 5% a year between 2015 and 2030,” according to Shell LNG Outlook, ﬁguring out a more cost-efﬁcient and scalable transport system is no doubt a massive opportunity.
LNGtainer's big departure is that it uses the existing cargo ship infrastructure, as opposed to relying on separate – and more expensive – high-pressure containers that are commong among its competitors.
The Helsinki-based company has been researching and developing their containers for several years, and are now bringing them to the market.
“Our containers have 15% more volume - in other words every seventh cargo transport is free of charge, and they also utilise 30% less equipment by weight, compared to normal gas shipping containers”, explains Tom Sommardal, LNGTainer’s CEO.
Sommardal, a maritime industry veteran, founded LNGtainer in 2011 to stop the waste he had seen in oil and liqueﬁed natural gas (LNG) transport
Six years later, his six man-team has built what LNGtainer says is "the world's largest" LNG tank that ﬁts inside a 40 ft. cargo container. The patented tank also houses a series of innovations Sommardal hopes will help transform the industry.
“Our containers use less insulation for maintaining internal temperature, and require less energy to prepare the liquid gas for use”.
What enables the new tank container's advanced design, Sommardal explains, is the fact that "the insulation has been moved from the outside of the cryogenic tanks to the inside.”
This increase in volume, reduction in weight, and the all important internal insulation give LNGtainer’s tanks a holding time of 60 days. In practice this means liqueﬁed natural gas can be transported to parts of the world that have, up until now, been quite impossible to access. Going forward the company plans to build on its partnership with the (undisclosed) Norwegian company, to serve even more
people, across increasing remote parts of the globe.
LNGTainer is also working with several other companies, developing similar projects in various other locations.
The mass production of LNGTainer's new tanks will begin next spring in Loviisa, Finland. The company's target is to produce one tank per day, and around 200 per year.
February 6, 2018
You currently do not have access to this article, please login or register to read more. Login to read moreor
« HOYER and H&S launch joint-venture
Tankwell opens new facility »